There is an interesting article at Psychology Today on yoga stating :”Evidence that yoga can enhance anxiety-killing neurotransmitters in the brain”: 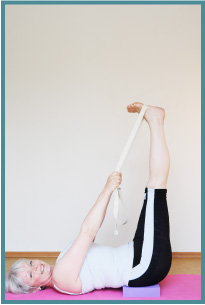 Why does yoga help and a flood of alcohol hurt? Well, the money is on GABA. Gamma-aminobutryic acid is a neurotransmitter I’ve made brief mention of before. GABA is the chief inhibitory neurotransmitter in the mammalian nervous system. It cools things off and chills things out. People with depression and anxiety have been shown to have low amounts of GABA in their cerebrospinal fluid. MRI spectroscopy has been used to estimate the amount of GABA in people who are depressed, and the levels are low compared to controls.
In 2010 the same group at BU did a second, somewhat larger study comparing walkers and yoga practitioners. Again, healthy people were studied, not anyone with psychiatric illness. This time, 19 yoga practitioners and 15 walkers did yoga or walked for an hour three times a week for twelve weeks. The yoga practitioners reported improved mood and anxiety compared to the walking controls, and MRIs showed increased GABA in the thalamus (a part of the brain) of the yoga practitioners compared to the walkers. The increase in GABA correlated with the decrease in anxiety scores, which makes sense. Since there is a body of evidence that exercise is helpful in depression and anxiety, it is interesting to see that yoga could be even more helpful than regular exercise.
See HERE for the full article.

One thought on “How does yoga help lower anxiety levels?”